The Ounila Valley links the Tizi n Tichka pass to Ait Ben Haddou and was originally the main thoroughfare for the trans-saharan trade route between Marrakesh and sub-saharan Africa. Today, evidence of this once highly important role is reflected in the numerous crumbling kasbah’s and ksar which are dotted all throughout the valley.

The famous ksar of Ait ben Haddou stands at one entrance to the valley (Ouarzazate direction) while the Telouet Kasbah of Thami El Glaoui – once Pasha of Marrakesh and the southern regions – stands at the other (just before the road links back up to the N9 highway). All the kasbah’s and ksar inside the valley were built by families of high status and would have had the privilege of receiving gifts from across the world as a sort of tax for using the road.
The Ounila river (Oued Ounila) brings life to the otherwise arid and dry land, forming a green, meandering river of lush plantations wherever the water flows. As you drive the road, scaling up and down in altitude, each turn will provide another stunning view over the green oasis which runs through the centre of the valley walls.
The valley is best visited in the spring when the cherry trees are in bloom and everything is nourished from the rains in earlier months, the Ounila is a remarkable display of southern Moroccan architecture, with tiny pisé villages and mosques stacked up into the valley walls while kasbah’s and ksar slowly erode back into the red tinted earth alongside them.
Ait ben Haddou certainly isn’t a “hidden gem” in Morocco. It’s been used as a backdrop in blockbuster cinema and is one of the most visited tourist attractions the country has to offer. Many visitors find themselves unable to head on into the Ounila Valley towards Telouet. This is partly due to the road being in bad condition and also due to it requiring a fair 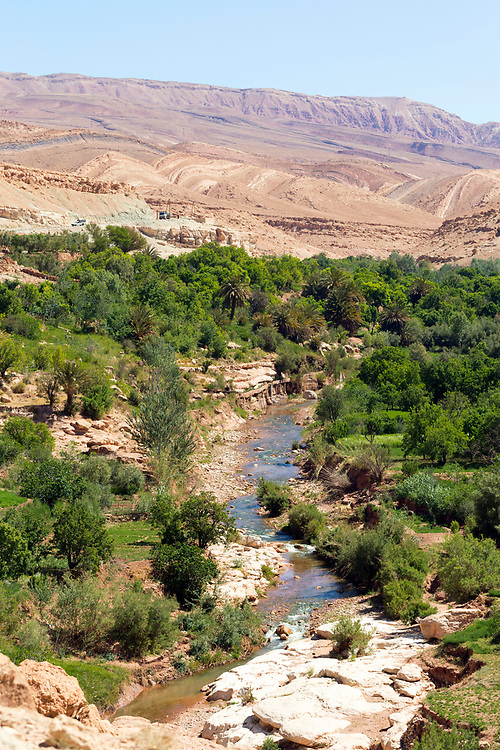